December 11, 2012 - Uncategorized - 1 comment
Hello,my name is Jeremii of one of the
leaders of Operation: Power Up.   Today, December
11, 2012, is the day where the last issue of Nintendo Power will be
published.  My subscription ended around
October, a few months after Nintendo confirm the cancellation of Nintendo Power,
so there was no way for me to renew.  Be
that as it may, I went to pick up the last issue.  As I saw the issue out on display, it felt
like a surreal experience.  Seeing the
giant homage to the first issue of Nintendo was heartwarming.  However knowing this might possibly the last
issue ever was deeply saddening.  It felt
like an end of an era.  I always felt
that Nintendo Power will always be there, like Nintendo itself.  However seeing the words “Final Issue” was
just too unreal. 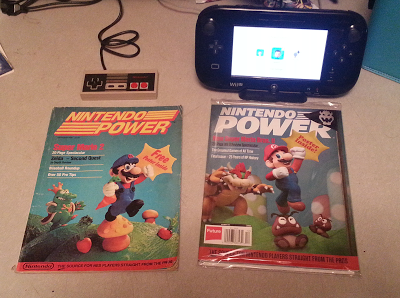 At the end of the issue, there’s a picture the reads “Game
Over!  Thanks for reading!”  We of Operation: Power Up are looking for the
“Continue” option.  Please continue to
support us in hopes of Nintendo of America bringing back or resurrecting Nintendo
Power as a magazine or some sort of digital format.  Don’t let this legacy die now.  Sign our petition, join or Facebook, follow us on Twitter, join our events, write letters to Nintendo of America to let them know that you want the Power, Nintendo Power.

One thought on “Continue? Yes!”